We left our slip at Marina Cabo San Lucas around 5 p.m. Thursday afternoon, moving all of 20 ft. across the water to the marina gas station parallel to us. Despite being in Mexico, we knew we weren’t going to be getting any price breaks by refueling in Cabo; and as we expected, the diesel prices were equivalent to those in Marina Del Rey, CA. But what we didn’t expect was to be charged a $50 (USD) fee just to dock the boat at the gas station on top of paying for the actual gas—So what you’re saying is we have to pay you just so we can pay you? I don’t get it… One might assume that the $125 per night slip rental fee we paid would buy us the right to just pay for the gas and bypass that asinine additional fee (one which we weren’t informed of until we were already filling up), but it was not so. If you’re crossing by Cabo I strongly suggest not filling up your tanks at Marina Cabo San Lucas, the whole situation was disgustingly rude.

Just as quickly as we said a not so fond farewell to the tourist-saturated circus, we found ourselves peacefully enjoying an epic sunset over the famous Cabo San Lucas arch; and from then on, the evening was pure magic. 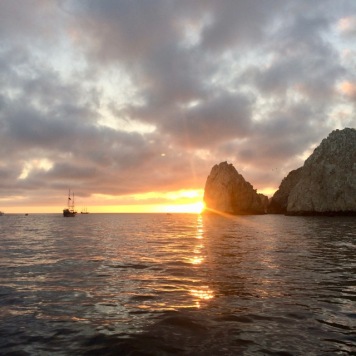 Ella and Tawnya whipped up a lovely stir-fry for dinner (one of their ultimate favorites) and everyone made their way to bed shortly after. It had been a long day packed with a monumental grocery store excursion, the refilling of ice, water and fuel, as well as the handling of multiple other odds and ends necessary for making the next leg of the trip as smooth as possible.

I’m on the 9 p.m. to 12 a.m. shift (and the 6 a.m. until someone else wakes up shift) so I sat up watching the moon shine down on the water, reveling in the unbelievable beauty of it all. I felt a noticeable difference between the Pacific Ocean to the west of Baja and the Sea of Cortez— which probably has more to do with the wind (or lack of) at the time, rather than any real difference between the waters. That night, as we headed southeast from the lowest point of Baja across the Sea of Cortez towards Puerto Vallarta, the waves rolled in parallel to the hull causing Violeta to rock dramatically from side to side.

The night was rather uneventful, until I went to the head and tried to pump the toilet… it wouldn’t flush. Ughhh, it was too late to ask Francisco what to do, so after my shift was done and Diego took over, I went to bed. Still, as Violeta rocked side to side, my mind ran wild with images of the toilet bowl overturning into a filthy catastrophe– I was sure a pee-soaked floor would inevitably be waiting for me when I woke up. To my astonishment though, not a drop spilled!

I went above board for the 6 a.m. shift, which has become my favorite part of day. Watching the moon’s final descent to the west as the rising sun paints the sky with color from the east is tragically underrated.

This morning was particularly special though; the ocean was calm, quiet, and virtually without a ripple. It looked as smooth as velvet, appearing if a plaid-like pattern was superimposed upon the magical blue water — it’s hard to describe exactly how I felt gazing into it at dawn. My body felt physically different, as though the subtle current was moving into me and slowing things down with every breath… I felt like Jello, haha, calm, tingly, Jello. 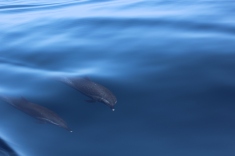 I found a baby calamari deceased on deck and I hooked it to Diego’s fishing line, maybe this will help us score another fish! (It didn’t..) Soon Ella was up, and she joined me for a bit of yoga, pranayama and meditation.

It was a lovely morning… and then I remembered the toilet situation. After pulling a pair of snug rubber gloves on up to my elbows and cleaning out the toilet with a red solo cup and a turkey baster, Francisco went to town. He got the Phillips and flat head screw drivers and some paper towels together, singing a song that went something like Get yourself a red solo cup we’re gonna have shit party, (something, something) Hey Mr. Hanky!

As he entered the bowhead he requested I put on Beethoven’s 9th to set the mood, it seemed most appropriate for the job. After having removed the hand pump, connecting plastic box housing and hoses—he found the culprit—a miniature and wildly unruly hair clip had gone astray and found its way into the toilet, the creator of all our subsequent woes. Lesson learned: No loose objects in the bathroom!

**Stay tuned for part II of the journey to Puerto Vallarta and find out how Violeta broke the wind barrier!