As the Houdetsi music festival came to a close we spent a magical day relaxing by the pool at Petronikoli Traditional House, a hotel in Houdetsi, which is run by the some of the warmest people I’ve met, and while we could have stayed there for days, as the afternoon waned it became time for us to make our next move.

We heard tales of an old yogi living by the river a few hours away in Faragi near Plakias, so we piled in Gerasimos’ car in search of a man around the age of 86 with a long white beard. He had apparently been living by the river for the last 27 years, and in time a whole yogi community had sprung up around him. Still going with the flow and enjoying our schedule of ‘no schedule’ we drove slowly down the coast and through the canyon roads, stopping occasionally to take photos of the sunset.

After a few hours we arrived at Villa Faragi in Lefkogeia near Asomatos, a few kilometers up the mountain from the beaches of Plakias. We dropped our stuff in the villa and then went to the quaint town of Mirthios to have dinner at Taverna Panorama, which offered a great view of Plakias bay and even better food. We woke up early the next day and, with few directions other than “he lives own by the river,” we went in search of the old yogi. As fate would have it we booked the place closest to the entrance of the gorge, and the location of the yogi, but we wouldn’t find that out for another three hours as we journeyed far off target.

We trekked down the mountain, waded back and forth across the steam, followed the river into unknown nooks and crannies, climbed carefully over barbed wire fences, and traversed the olive groves until the sun hit its peak and we almost gave up. We ate figs off of trees and doused ourselves decadently in water from a hose, taking gulps as it poured out as only one of us thought to bring a bottle of water on this “short” journey.

We hiked back along the river towards the villa, and found a still spot in the stream. Taking off our clothes and placing them on a boulder, we all dove in and splashed around. Figuring we’d missed our chance to meet the yogi, we swam upstream to a spot where the water cascaded over several large rocks covered in cushy moss and each climbed atop our own little throne, smiling from the inside out and peacefully enjoying the sound of the babbling brook.

I swam back down stream and as I put my clothes on I noticed two white solar powered office laps sitting on a rock in the water up ahead. Curious like a child, I went over and clicked their buttons and was beyond surprised that they both worked! I giggled to myself and then looked to my left and saw a rug poking out beneath the shadows of a tree, I peered closer and saw an elderly man with long white dread locks sitting in lotus position with a little orange cat sitting next to him. I subtly waived, cautious not to disturb him in case he was meditating, and then hurried back to the others whispering excitedly, “I think I found the yogi.”

Not shy in the slightest, Anna and Daiva waded over to the yogi’s makeshift home and he invited them to crawl aboard the rug– Gerasimos and I joined shortly after. We talked with him for a while and he told us that he had been living there for many years, people would come and visit him often,  bring him food and share stories. He showed us some of his incredible art work– massive intricately painted sacred geometry designs on thick poster paper that were so precise they looked like they had been created by a computer (and that is actually what I thought until I watched him over the next few days leaning over his home made wood and rock desk wearing a bulky head band of binocular magnifying glasses and carefully painting in what he’d drawn with a tiny brush).

He had been practicing yoga since the 60s, traveled the world and then it came time for his Sannyasa, the time in the later phase of life where the yogi renounces most worldly luxuries, and chooses to live a simple life in nature.

The next day my three friends headed back to Chania, and I stayed behind… I will tell you about the rest of my adventures, including sleeping down by the river in the next post! 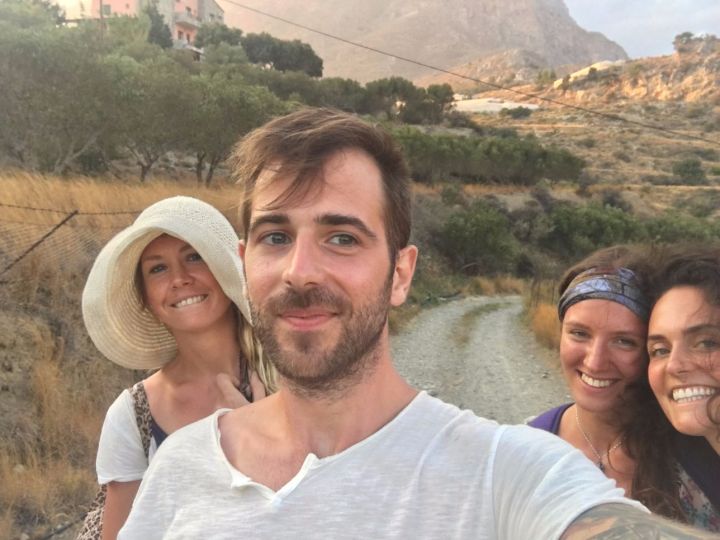